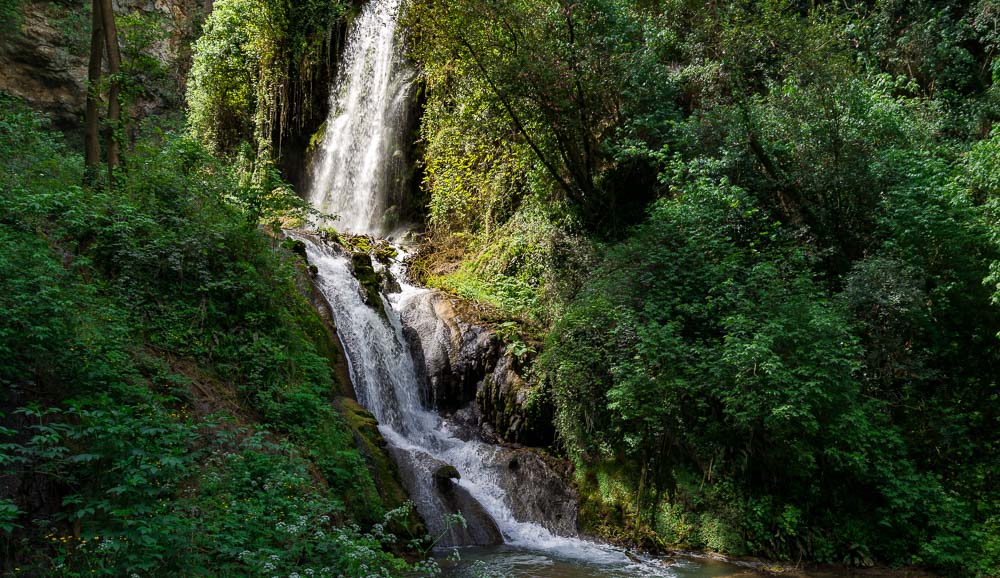 After seeing what a lovely room we’d booked, and how much there is to see in Tivoli, we asked Alessandro if we could book a second night with him. Unfortunately, he already had a prior reservation, so this morning, we packed up, had breakfast with Alessandro, and headed into town in the car. Parking was easy to find downtown, and we set off to start our tour of Tivoli. A short walk got us to Parco Villa Gregoriana, a stunningly beautiful park in what used to be called the Valley of Hell for the thunderous roar of a waterfall tearing down a ravine on the very edge of town. Three hundred years ago, local officials started a hydro-engineering project to redirect some of the water to prevent the town from being eroded away. Although there is still a waterfall in the gorge, it is no longer quite the raging torrent it used to be; much of the water is redirected through a tunnel to the other side of the park.

On one side of the park (where we entered) is the ruins of the villa of Manlio Vopisco, a Roman consul from the first century. You can walk through the remains of the foundation and basement, but there’s not much else left. Following the path down switchbacks in the side of the gorge, you first arrive at the diverted waterfall pouring out of two 200 meter tunnels, dug by hand in the 1700s. Continuing on, you get to the bottom of the gorge where you can gaze up at the reduced version of the original cascade, and wonder at how close it is to the edge of town. Makes you realize why the town officials decided to undertake their tunneling project.

There’s much more to see here, and we spent over three hours walking around. At the end of the tour, on the other side of the gorge, there are two ancient temples mostly intact, although they sit on the very edge of the ravine.

It was starting to get a bit late, so we opted to cut Hadrian’s Villa from our itinerary, and just spend time at Villa d’Este, a cardinal’s palace in Tivoli with lots of beautiful artwork, and an incredible garden. The inside is pretty neat, but it’s the gardens that make this worth the entry price. Widely thought to be the best example of Italian gardens in the country, they are a wonderful mix of greenery, statuary, and water features. We could’ve spent much more time here, but we did want to get to Rome and check in to our hotel before it got too late, so we cut it short at two hours and headed back to the highway.

The drive to Rome was not too bad (about an hour), and the only traffic we hit was going around Rome and even that wasn’t unmanageable. Pinewoods Hotel is near a metro stop (which we didn’t elect to use), is cheap, and reasonably neat and clean. The free breakfast is great, and the WiFi worked decently well. Parking is also free, and there was lots of space in the lot. Our only minor complaint is that the shower was incredibly small. I’m a bit over six feet tall, and about 180 pounds, and I could hardly turn around in there. But, all things considered, it was a really good value place to stay.